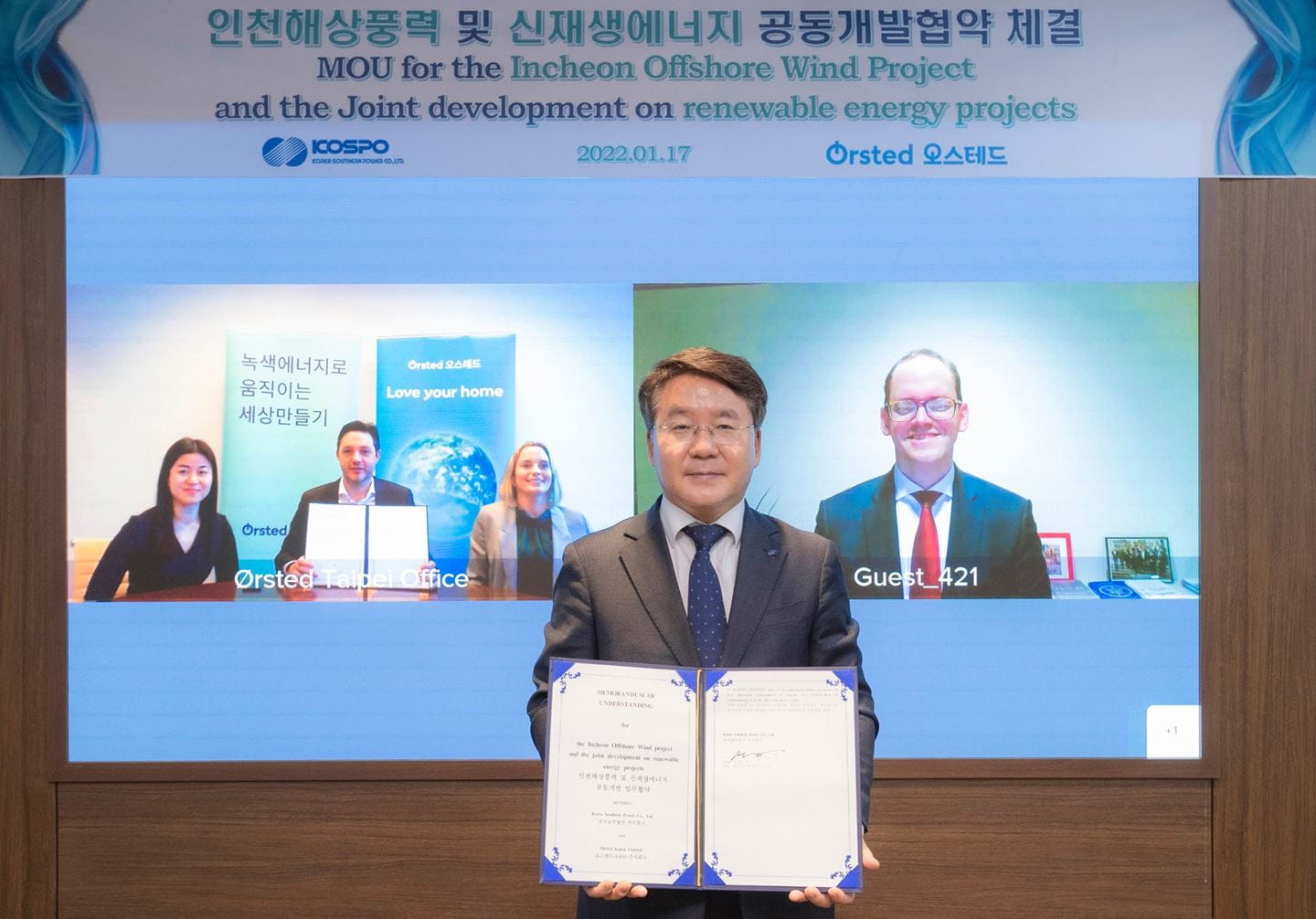 In addition, the total investment for the Incheon offshore wind projects is multi-trillion Won, and the large-scale investment related to the Green New Deal will lead to various positive ripple effects, such as the creation of a construction base, supply of equipment, and job creation, which is expected to revitalize the Incheon economy.

Ørsted is a global offshore wind leader with a market capitalization of approximately KRW 55 trillion, operating a total of 7.6 GW of offshore wind farms, and occupies about 30% of the global installed capacity.

In cooperation with Ørsted, KOSPO expects to strengthen its development capabilities for large-scale new and renewable energy projects, including technological exchanges for offshore wind power O&M.

In addition, Ørsted and KOSPO plan to build an offshore wind power project site at a distance of more than 70km from the Incheon coastline to minimize environmental impact and strive for win-win cooperation with local residents and fishermen in Incheon to minimize damage to the nearby fishing environment.

Martin Neubert, Deputy Group CEO of Ørsted, says: “This MoU marks an important milestone for the Incheon offshore wind projects to receive secured revenues, taking us one step closer towards making the flagship wind farms a reality. We are confident that by leveraging our more than 30-years of global experience as well as the know-how and local expertise of KOSPO, we will adapt to the Korean market and form a strong team to foster a vibrant offshore wind industry to create local benefits and economic opportunities, making significant contributions to support Korea in achieving its ambitious 12 GW offshore wind target.”

Seung-Woo Lee, President of KOSPO, says: "The MoU with Ørsted, the world's leading company in the offshore wind industry, will be of great help to our company's expansion of the new and renewable energy business." He also said: "I expect that it will not only achieve the government's energy transition goal, but also speed up Korea's large-scale offshore wind power development."

About KOSPO
Korea Southern Power is a public energy company that takes the lead in practicing carbon neutrality and is doing its best to provide clean and stable electricity. In addition, Korea Southern Power is producing cleaner energy by expanding renewable energy such as solar power, wind power, and fuel cells and eco-friendly LNG power sources, and is developing facilities digitalization and hydrogen convergence business such as smart power plants and virtual power plants. Through this, Korea Southern Power plans to lead the global standard in the new energy industry.”
About Ørsted in Korea
As the global leader in offshore wind, Ørsted has long-term collaboration with Korean suppliers since 2013 and established our office in Seoul for offshore wind development since 2018 with fabrication yards in Goseong, Tongyoung and Gwangyang to support our global and regional portfolios.

In November 2020, Ørsted announced the intention to develop Incheon offshore wind projects, which will be located more than 70 kilometres off the coast of Incheon City. With a potential capacity of 1.6 GW, the projects can provide clean energy to power up to 1.3 million Korean households and a reduction of almost 4 million metric tons of CO2 per year. The construction of the projects will be finalised in 2026, subject to permits, off-take agreement, and final investment decision. For more information, please visit https://orsted.kr/