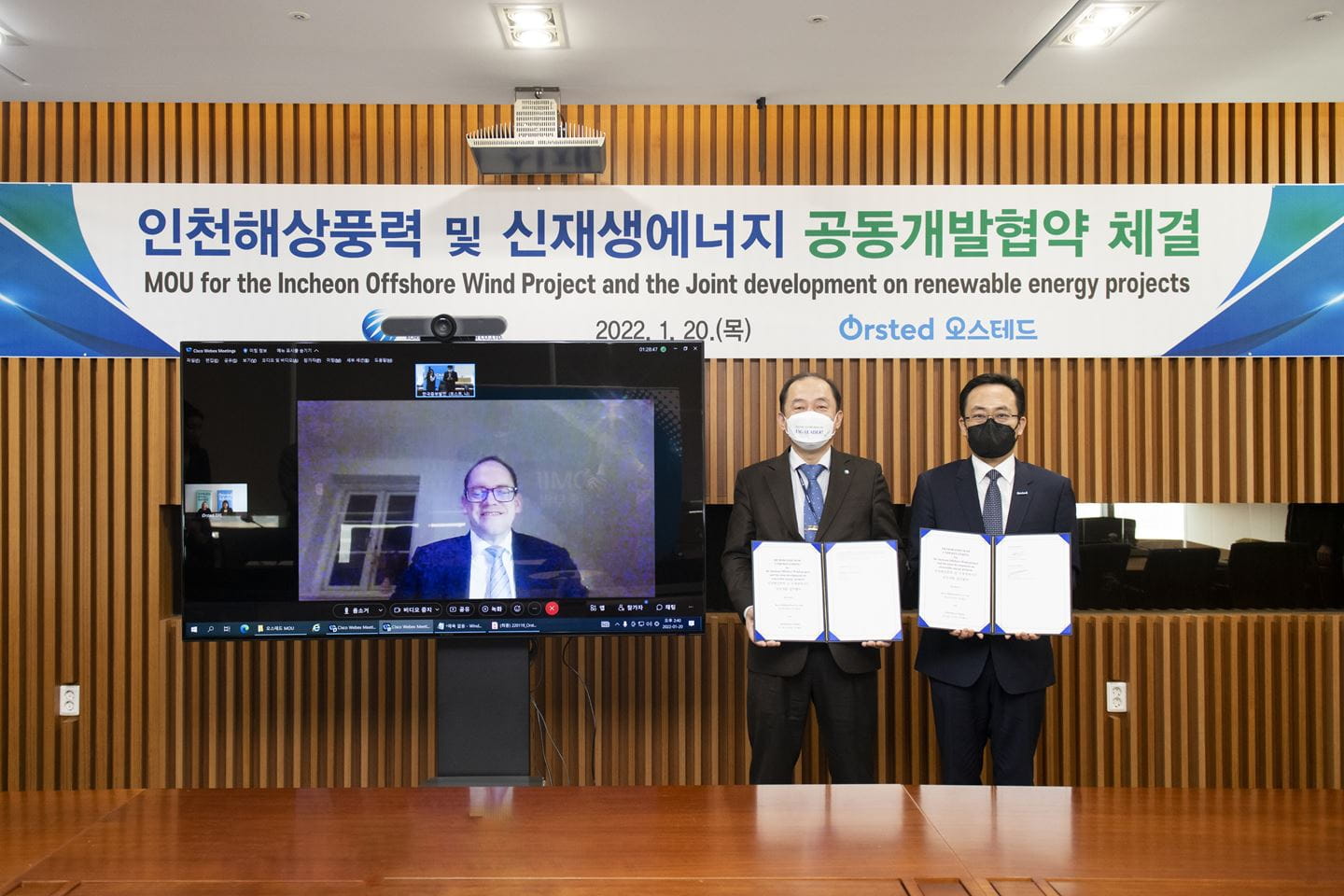 Under the MoU, Ørsted and KOMIPO agreed to contribute to the growth of offshore wind power and carbon neutrality in Korea and to explore key areas of collaboration on Ørsted’s Incheon offshore wind projects, including offtake agreements and participation in the JV operation and O&M, working towards a broader collaboration on developing renewable energy in Korea.

A KOMIPO official said, "We will cooperate with Ørsted to actively respond to carbon neutrality and energy transition through exchange of offshore wind power O&M technology and mutual cooperation in domestic and overseas renewable energy projects."

In addition to this project, KOMIPO is developing an additional large-scale offshore wind power project in Incheon's EEZ (Exclusive Economic Zone) to take the lead in carbon neutrality as an eco-friendly energy company. Through this, KOMIPO plans to fulfill its social responsibility as a public corporation by always applying a business model that coexists with residents and the environment.

Martin Neubert, Deputy Group CEO of Ørsted, says: “The MoU, the second of its kind we inked with the government-affiliated power generation company in Korea, marked another major step for Ørsted to work with local partners to ensure the success of the Incheon offshore wind projects. This is an excellent example of our commitment and adaptiveness to working with local partners, creating a win-win situation for Korea’s offshore wind industry and making significant contributions to the country’s energy transition.”

Ørsted has long-term collaboration with Korea in the offshore wind sector, working with the competent Korean suppliers in the global portfolio since 2013, having provided more than 2 trillion Won worth of contracts. The company is committed to expanding the strong partnership with Korean stakeholders and suppliers to its domestic market, leveraging the company’s offshore wind projects, which will be located more than 70km from the main parts of Incheon City.

About Ørsted in Korea
As the global leader in offshore wind, Ørsted has long-term collaboration with Korean suppliers since 2013 and established our office in Seoul for offshore wind development since 2018 with fabrication yards in Goseong, Tongyoung and Gwangyang to support our global and regional portfolios.

In November 2020, Ørsted announced the intention to develop Incheon offshore wind projects, which will be located more than 70 kilometres off the coast of Incheon City. With a potential capacity of 1.6 GW, the projects can provide clean energy to power up to 1.3 million Korean households and a reduction of almost 4 million metric tons of CO2 per year. The construction of the projects will be finalised in 2026, subject to permits, off-take agreement, and final investment decision. For more information, please visit https://orsted.kr/