Ørsted, the world’s most sustainable energy company, and POSCO Group, one of the largest conglomerates in Korea, today announced the signing of a Memorandum of Understanding (MoU) to expand their relationship. POSCO and its affiliates will apply the group’s joint capabilities to support the development of Ørsted’s 1.6 GW offshore wind projects off the coast of Incheon City. Moreover, Ørsted and POSCO will conduct feasibility studies on potential collaboration on renewable hydrogen. 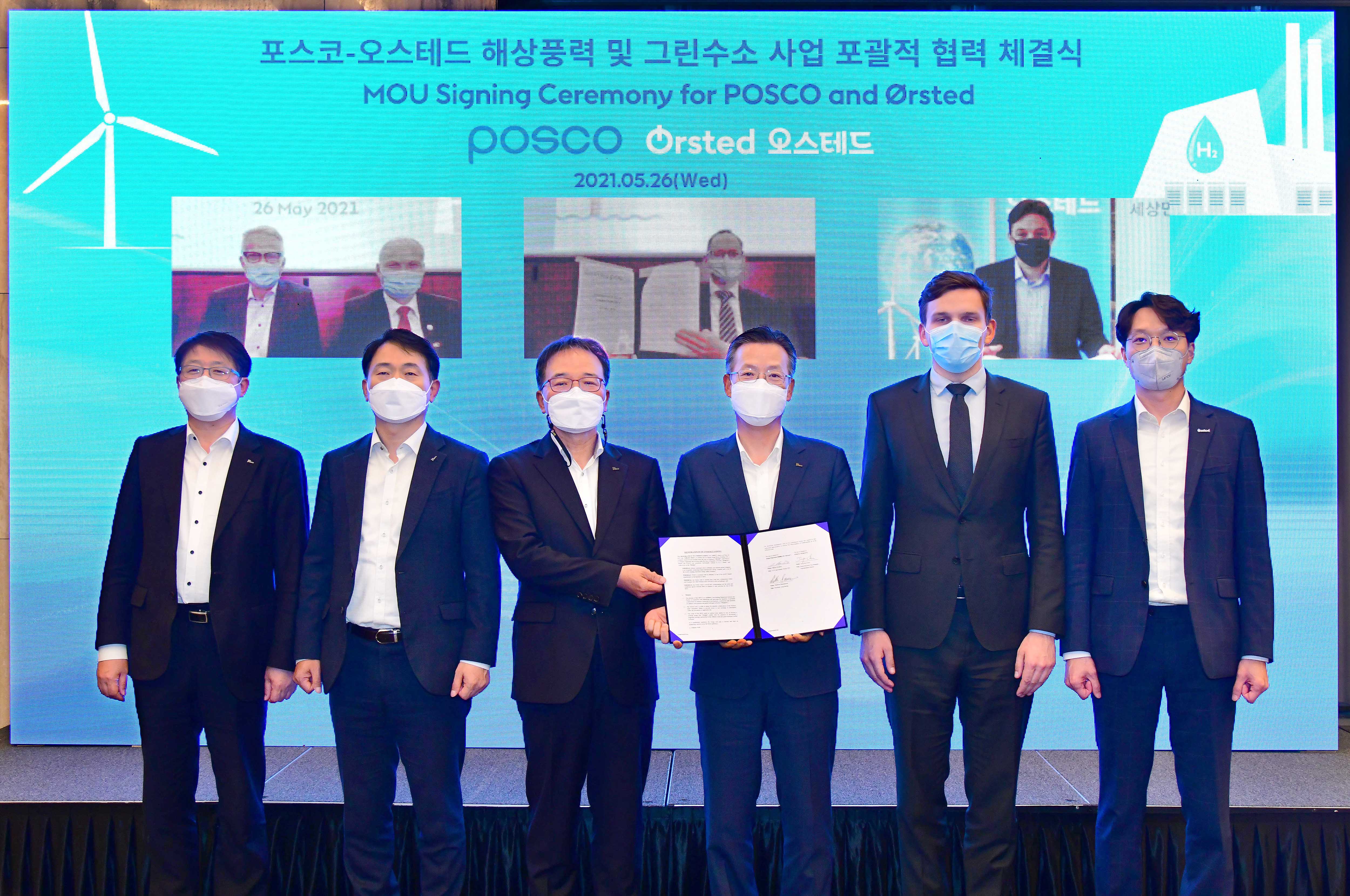 Korea has set an ambitious target of installing 12 GW offshore wind capacity by 2030. In September 2020, Korean President Moon Jae-in further announced the Green New Deal which targets net zero emissions by 2050. With this MoU, Ørsted takes another significant step, in addition to the company’s flagship Incheon projects, in pioneering renewable energy development in Korea and supporting Korea in the country’s transition to clean energy.

Ørsted has a well-established relationship with POSCO, whose steel business has been one of the strategic global suppliers and a trusted partner supplying over 100,000 tons of steel for Ørsted’s Hornsea 1 and three other offshore wind farms. In December 2020, POSCO Group joined the Korean government’s decarbonisation declaration, announcing its ambition to become a leading renewable hydrogen company and reaching carbon neutrality by 2050. 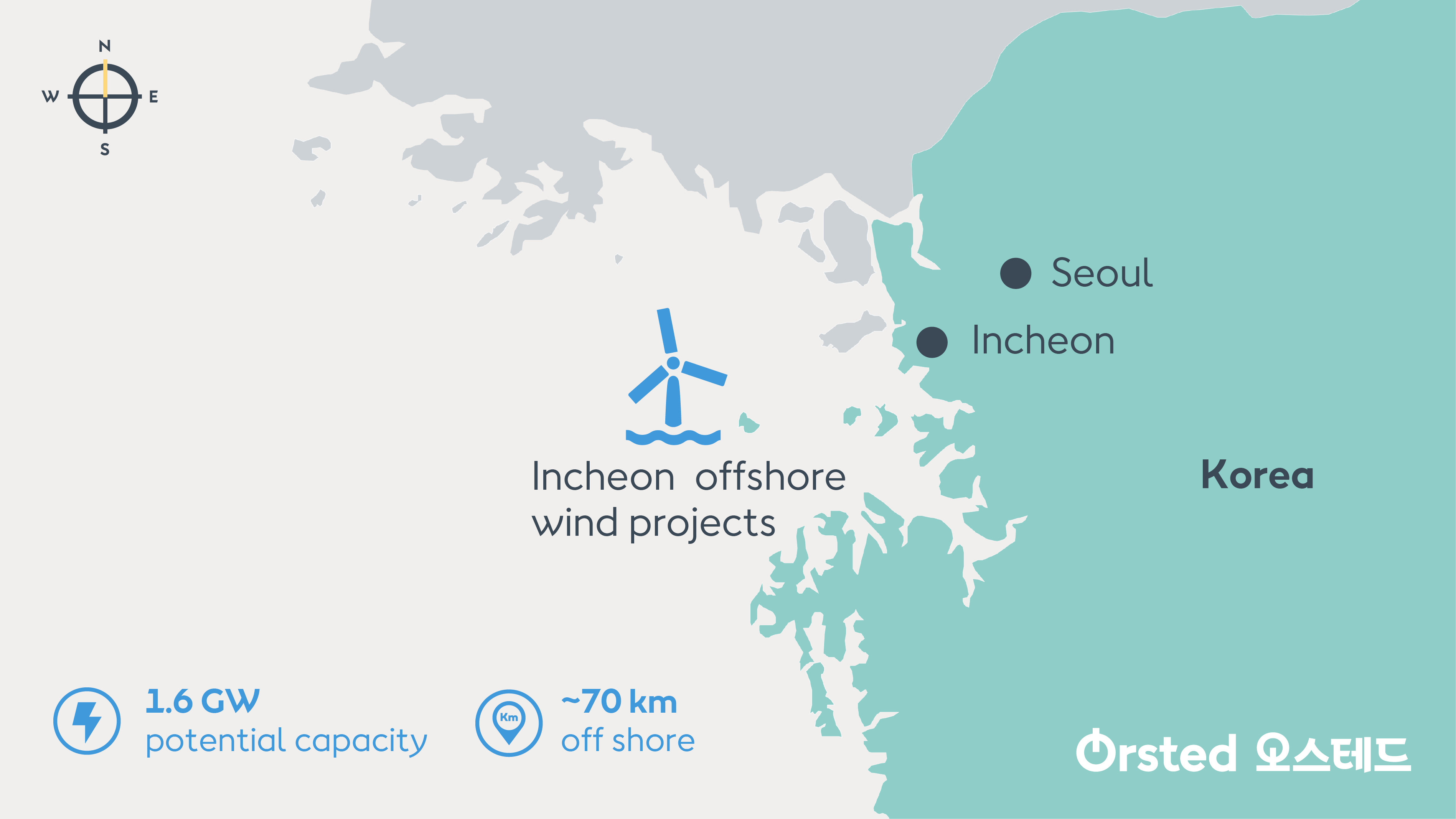 Mads Nipper, Group President and CEO of Ørsted, says: “With a vision of creating a world that runs entirely on green energy, Ørsted transformed from a fossil-fuel intensive utility to the world’s most sustainable energy company. We are determined to be a global catalyst for systemic change and to help countries and companies undertake their green transformation through scaling existing green energy solutions such as wind and solar and developing and scaling new green solutions such as hydrogen. It is wonderful that we could announce the MoU with POSCO during the P4G summit in Korea, which gathers global thought leaders and decision-makers to work towards achieving Sustainable Development Goals and creating a more sustainable world.”

Matthias Bausenwein, President of Ørsted Asia-Pacific, says: “This MoU is a major step for Ørsted to deepen our collaboration with POSCO, which shares our mindset of taking responsibility for reducing CO2 emissions. We look forward to bringing in our experience and insights to support Korea in achieving its energy transition and decarbonisation goals. With the Danish state as our majority owner, Ørsted is committed to working with local partners and suppliers across the value chain to build a vibrant Korean offshore wind industry through our 1.6 GW Incheon projects and potential more buildouts in other regions of the country. In addition to greening the electricity mix, offshore wind can become the feedstock for renewable hydrogen which can help decarbonising sectors that cannot be directly electrified such as transport and heavy industry.”